Phoebe and Her Unicorn follows the adventures of Phoebe as she learns what it means to be friends with a unicorn. That unicorn is none other than Marigold Heavenly Nostrils, one who is so beautiful that she becomes transfixed whenever she sees her own reflection. The friendship begins one day when Phoebe is mad and skips a stone across a pond, hitting Marigold. In gratitude for having her self-gazing disturbed, Marigold grants Phoebe one wish. Phoebe chooses having the unicorn be her best friend.

The comic started out as Girl but was later adapted to become Heavenly Nostrils. It was an online-only comic at GoComics.com, starting on April 22, 2012. As Dana began working towards a syndication deal with newspapers, the name was changed to Phoebe and Her Unicorn. Several of the comics were re-published in color while this was being done. It launched nationwide on March 30, 2015 in over 100 publications, one of the largest in GoComics history.[1] The first few weeks were spent recapping the story for the new readers. As the story progresses, some of the storyline shown in the pre-launch comics are presented additional times, changed or used as the basis for new storylines. In these cases, the newest comics are simply a re-telling in a different way of the same story.[2]

As part working towards national syndication, Dana began working more closely with an editor. A few comics were subsequently changed, such as the Sunday comic for April 29, 2012, where the punchline was changed from "Read the Patriot Act" to "Unicorn."

Phoebe is drawn wearing different outfits appropriate to the time of year and will change her hairstyle occasionally. This is in contrast to many comics and animated TV series where the characters wear the same clothes day after day. 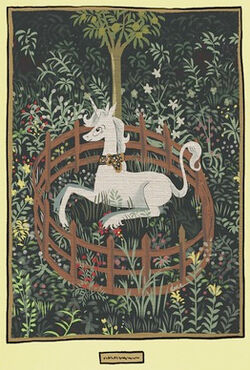 Modern interpretations of unicorns are typically a horse with a horn on its head. Marigold is more swan-shaped with a long slender neck, slender legs with cloven hooves like a deer and fluffy fetlocks.[3] This is in keeping with Medieval illustrations of unicorns, which should be no surprise, as Marigold has posed for many Medieval tapestries. In the February 13, 2018 comic, Marigold retrieved a drawing from her magical pocket dimension of "The Unicorn in Captivity", saying that she takes credit for the drawing since she resembles it.[4] In the December 15, 2019 comic, the painting with Marigold in it was shown.

For further information about Medieval illustrations of unicorns, see Phoebe and Her Unicorn/Medieval artwork.

For newspapers that run their comics in black and white, backgrounds are kept simpler and use a halftone screen for shading. The picture to the right is for April 4, 2015 and shows the flexibility that comes with a full-color edition.

This is a standard practice in syndicated comics. Daily comics are colored by a separate colorist, but Dana often does the Sunday comics herself, as it gives her a chance to demonstrate her artistic abilities.

Retrieved from "https://phoebe-and-her-unicorn.fandom.com/wiki/Phoebe_and_Her_Unicorn?oldid=5966"
Community content is available under CC-BY-SA unless otherwise noted.